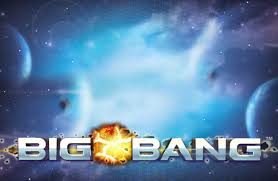 Big Bang is a vibrant high quality online video slot game produced by Net Entertainment. The theme of this game has to do with space, cosmology and tracing the origins of the universe. As such, players will encounter images of planets, asteroids, stars, supernovas and the grand vast emptiness of space. One of the defining characteristics of this game is the quality of the graphics and animation. As a slot, the graphics are far and beyond the gaming standard.

The symbol animation is smooth and combined with the sound effects and energetic background music makes for a thoroughly entertaining experience. In keeping with the cosmic theme, the slot reels are set to a backdrop of a vast and spectacular view of space. In the distance we can see thousands of stars and nebula exploding across the black void of space.

The slot setup in Big Bang is based on the classic setup of five reels with 25 paylines. The game itself does seem to be lacking in bonus features with only a wild symbol and a bonus multiply meter to keep players interested. On the reels players will find a host of images all relating to space and cosmology. Some of the highest paying symbols include a red sun, a glowing yellow planet with two moons, a double mooned green planet, an eerie looking purple planet and an asteroid. To complete the lower paying symbols, the slot designers have employed the use of the standard high card symbols that have all been spruced up and decorated to blend into the space theme.

As one of the few bonus features in Big Bang, the wild symbol plays an important role in building credits. The wild symbol in this game is played by the animated yellow and orange sun. The sun wild symbol can be used to substitute for any of the other space themed reel symbols in order to form a winning combination. Because there are no scatter symbols or bonus symbols, the yellow sun can substitute for absolutely everything. The wild symbol is also the highest paying symbol in the game. If players a fortunate enough to find all five wild symbols across the reels they will trigger the slot jackpot of 1000 coins.

After the 4x multiplier the meter rises to 8x, then 16x and finally 32x. It may sound impossible to achieve but if players can get six consecutive wins in Big Bang they will eventually reach a stage where the next win is multiplied by 32x resulting in a very healthy payout.