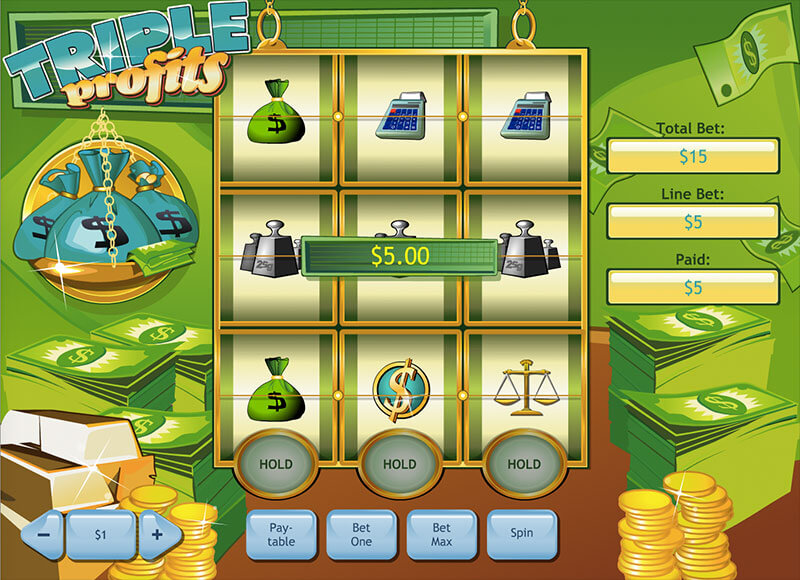 Triple Profits is an online slot game that has the look of a classic style slot with only three reels, three rows and three pay lines but it is anything but. The online slot game, which was developed by Playtech, features wild symbols, a bonus round and a unique multi spin feature. The Triple Profits online slot theme is based purely on money and there are quite a few different symbols that portray the theme on the reels. These money themed symbols include gold bars, piles of money, red; blue and green dollar sign symbols, red; green and blue moneybags, a safe, a calculator, a scale and weights.

The dollar signs pay out anything from 15 coins to 100 coins while the money bas pay out anything from 5 coins to 50 coins. The safe symbols, calculator symbols and the weights pay out 15, 10 and 5 coins respectively while a mix of the three symbols pay out 2 coins. The golden bar symbols are the highest paying symbols where three landing on an active pay line will pay out the highest jackpot prize of 1 000x the pay line bet when the maximum bet is placed. If one or two gold bar symbols appear they pay out 2 to 5 coins.

Each row is essentially a pay line, which will only pay for combinations starting at the furthest left reel. Each pay line allows a bet of one to five coins with the values of the coins ranging from 0.01 up to a maximum of 5.00. The maximum bet per spin is 75.00, which can be placed automatically by clicking on the max bet button.

The Triple Profits multi spin feature is awarded randomly which will be made known by the hold button flashing. When this happens a second free spin is given after a selection of symbols are held. It is possible to select the best possible symbols to try for better wins. The remaining symbols will spin on the reels for a second time, which will then reveal the possible combinations.

The Wilds and Scatter Symbols

The Triple Profits wild symbol is represented by the golden bars that display the word wild on it. This symbol acts a substitute to assist with forming winning combinations. The wild will substitute all the other symbols including the stack of money scatter symbol. For instance, similar scenarios can be found online here.

The stacks of money are the Triple Profits scatter symbols, which trigger the money bags bonus feature when three of these symbols land adjacent on an active pay line. The scatter symbols don’t offer cash pay outs when landing in any sort of combination.

When the Triple Profits moneybags bonus feature is triggered, the screen will display twelve bags of money each containing a random mystery cash prize. If the maximum bet is in play then three money bags are picked but if the bet is a lesser amount then only two moneybags are picked. Each picked bag reveals a cash prize that is added to the total win amount. One bonus round is awarded per combination of scatter symbols on each row.