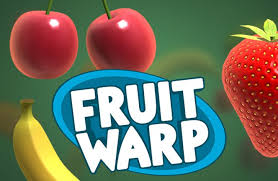 The Thunderkick Fruit Warp slot is a 3D animated online video slot game with a twist. When the game first loads, players might be a bit confused at how the reels and symbols works. In short, there are no reels in this game. Instead, a win is created by finding three of the same type of symbol anywhere on the screen. The game itself has a fruit/space theme. The backdrop to the slot is a simple green screen with tiny bubbles floating about.

When the 3D fruit symbols do appear, they hang suspended in mid-air rotating gently in place. To accompany the strange setup, the game has a bubbly Caribbean type musical soundtrack playing in the background. When a winning combination is achieved, the sound kicks up a notch with flurry of musical notes bursting out.

The Thunderkick Fruit Warp slot does not have any reels or paylines. This completely unique slot has a total of nine symbols that appear on the reels on each spin. Players can set the number of coins bet per spin from 0.1 coins all the way up to 100 coins per spin. When the spin button is pressed, the symbols fly onto the screen in 3D animation before rocking gently into place. All nine symbols are types of fruit. In this game, a win is created by landing three or more of the same fruit anywhere on screen. As there are no reels or win lines, it is possible to land all nine of the same symbol at once.

The highest paying fruit symbol in the Thunderkick Fruit Warp slot is the dragon fruit. Finding all 9 onscreen will trigger the highest payout at 216x the total bet stake. Next in line is the Kiwano Melon followed by the star fruit paying out 45x and 42x. The lower paying fruit symbols include grapes, banana, orange, strawberry, plum and cherries. Along with offering the standard bonuses like mentioned here, the game also includes bonus features in the form of multipliers, substituting symbols, re-spins and a free spins bonus round.

In the Thunderkick Fruit Warp slot, if players land 4 of the same fruit symbol on screen, this will trigger a re-spin where all the non-winning symbols are replaced with new symbols. Finding 5 or more of the same fruit anywhere on screen will trigger Fruit Mode. This is the games major bonus feature. When fruit mode is triggered, the triggering fruit will be placed on the fruit meter at the bottom of the screen. If any fruit matches the fruit in the meter a free spin will be given. Each time a matching fruit is added, one step is taken on the fruit meter.