Roman Chariots slot game has been popular in land based casinos for years, and is now gaining popularity as an online game. It is produced by the innovative games developer, Williams Interactive, and includes a range of exciting new features like the Supercharged Reels, with stacked Wilds and a free spins bonus round.

Roman Chariots slot is a five reel game, with twenty pay lines. All symbols relate to the ancient Roman sport of chariot racing, and you will see the horses and armour like Swords and Shields and Helmets, as well as the Charioteer himself. There are the classic playing cards from Ten through to the Ace that represent the lower value symbols. You will hear the wealthy citizens of ancient Rome cheering on the chariot races in the background, and the sound effects together with the entertaining graphics WMS Gaming has used, make Roman Chariots slot an enjoyable game for everyone.

The Supercharged reels that WMS Gaming has introduced, are three small reels in yellow, blue and red, set above the main set of reels.

The Wild in the game is the Chariot, and it can appear stacked on reels two, three and four. The Supercharged reels come into play with the Wild symbol. These reels offer a bonus type feature, and you are awarded a set of spins on one of the separate sets of reels. Depending on the set of reels you use, any winning combination that appears will increase in value. 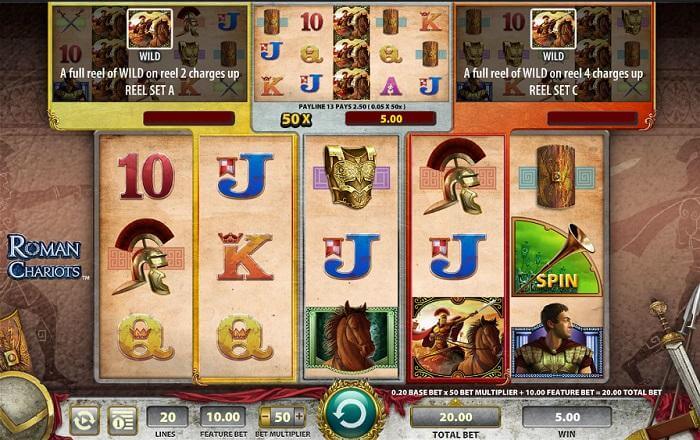 Free Spins On the Small Reels

If you land the Bonus symbol anywhere on reels one and five you will get eight free spins. The extra bonus is that the Reset button is removed during this round, so you can have all eight free spins to build up winnings by using the small reels. All wins will be multiplied by two, and more free spins are available by landing more bonus symbols. You can trigger an even bigger multiplier if you find a special Spin symbol on the end reel. This will reveal another multiplier that can increase the multiplier attached to the Supercharged reels.

WMS Gaming often creates a very different type of slot game, and Roman Chariots slot gives you a chance of great wins with a spin of one of the Supercharged reels.