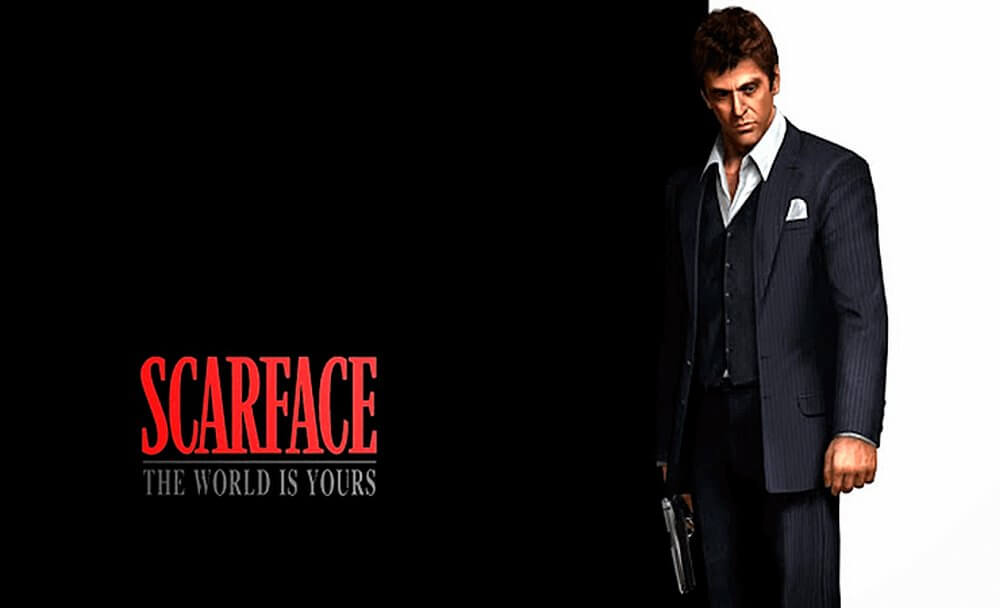 Scarface online video slots game by NetEnt is based on the famous Crime Drama film by the same name. The film, Scarface, was first released in 1932 and a remake was released in in 1983. It is a crime drama that tells the story of Cuban refugee named Tony Montana (played by Al Pacino) who arrives in America with no money or possessions but who joins the drug trade and rises through the ranks to become a powerful drug lord. Scarface is considered one of the all time best movies in the mob film genre.

The online slots machine game, Scarface,which can be played at online casino Sri Lanka, is based on the 1983 version of the film and features the main character, Tony Montana, as well as other core characters in the film. NetEnt, in cooperation with Universal, has done an excellent job in bringing the action from the big screen across to the small screen. There is an introductory series, which introduces you to the theme of the game and the characters, before you play. The graphics, animations and music are exceptional, keeping you in suspense throughout the game in the same way the movie does. Scenes from the movie are also included during the bonus rounds and important characters and objects in the film are used as symbols.

Gameplay and Symbols in Scarface

Scarface has 5 reels and 20 paylines. There is no progressive jackpot but the betting range is large enough to suit both the player who does not want to risk too much and the serious player who will bet more in order to have the chance to win more. The coin sizes range from 0.01 to 0.50 per payline and you can play for free or for real money. The maximum payout for one payline is 2,000 coins.

Scarface has regular playing card symbols as well as symbols based on the characters from the film. There are 3 stacked wild symbols that will appear on the middle 3 reels. A stacked wild is a symbol that, when it appears on a reel, will cover the whole reel. The stacked wild symbols in Scarface are Tony Montana, Elvira and Manny. These stacked wilds will not only substitute for all other symbols (except for the other wild symbols) to help form winning combinations but in addition each of these wild symbols will activate a unique bonus feature.

The Bonus Features in Scarface

If the Manny wild symbol appears stacked on reel 2 then it will trigger the Nudge Spins Feature. During this bonus feature the Manny wild will change to a nudge wild, which also has the ability to substitute for the regular symbols to form a winning combination. The nudge wild symbol will then drop down a line on the reel while the reels respin, giving you a chance to win again.

A fully stacked Tony Montana symbol on the third reel will trigger the Scarface bonus feature, which is based on one of the most famous scenes in the Film. The aim of this bonus round is to protect Montana from his enemy’s hit squad. You must shoot the attackers. You will win an award for every attacker you manage to kill.

Finally, if you get a fully stacked Elvira symbol on reel 4 then you will trigger the free spins bonus feature. This feature awards you with 15 free spins and during these free spins any winnings are tripled.