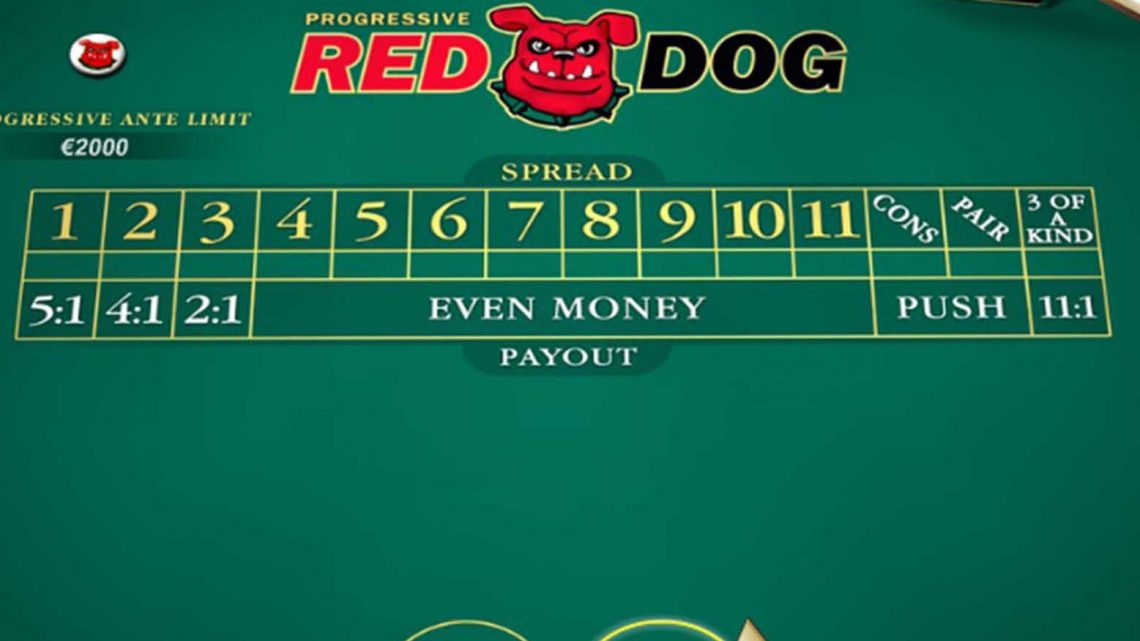 Red Dog Progressive started out as a land based casino table game.  Even then it differed substantially from traditional table games such as Baccarat and Blackjack, the greatest deviation from the standard way of playing being that players were no longer betting against the house but rather on the difference in value between the cards dealt on the table by the dealer.

Two cards are initially dealt face up on the table.  The player must now make a bet decision based on the probability of whether the third card will fall within the value range of the initial two cards dealt.  The closer the initial two cards are to each other in value, the higher the risk.  The higher the risk, the greater the payout.  By the same token, the lower the risk, the lower the payout.

In the event that the cards reveal consecutive values, such as a Queen and a King, the wager placed is returned to the player.  Should the cards however present with an identical value, the player will have the option to gamble on the value of the third card.  Three of a kind will see the bet placed multiplied by 11.  A mismatch results in all bets forfeited.

This simple concept has now been developed into an online slot game, governed by the same basic principles and rules of play.

During play, all winnings may be left on the table in order to serve as the bet for the next game.  This certainly quickens the pace of the game, and serves a function akin to the traditional Autoplay function employed by most sites reviewed here.

The game is played using only one deck of 52 playing cards.

Initial bets are placed prior to the initial two face up cards being dealt.  Based on the risk factor, the player may then decide whether to increase the initial bet placed for the particular round, or not.

The range for placing bets is wide, with the minimum initial bet placed starting at a nominal 0.10 credits.  The maximum bet allowed is 100 credits.

There is no progressive Jackpot or bonus games.

Luck Instead of Strategy

Red Dog Progressive is a game based on pure luck and chance, and there is not much strategy involved.  This makes the game ideal when a round of relaxed playing is required, as opposed to constantly employing fresh ideas, becoming acquainted with complicated rules and improving on strategic play.

The online version of Red Dog Progressive has become increasingly popular due to the ease of access factor.  It’s no longer necessary to make a trip to the local casino to enjoy a table card game, but can be played anywhere by using a computer with internet access.