The theme of the Pompeii slot game is based on the story of the wealthy Roman city that was destroyed and covered in volcanic ash many centuries ago, when the volcano Vesuvius erupted. This game is still one of the favourite games in land based casinos all over the world, and the online version is also becoming popular at online casino singapore.

Pompeii is produced by the Australian developer Aristocrat, and has five reels and 243 ways to win. These 243 ways to win are more rewarding to play than the fixed number of pay lines.  As long as the matching symbols, including Scatter symbols, appear on adjacent lines, reading from left to right, you will have a win.

Symbols all Connected to Rome and the Romans

The background to Pompeii shows all the beautiful buildings of the city before the disaster struck. The volcano is in the distance, already spewing smoke and fiery lava. The symbols are all related to Rome and Romans, and you will see a Chariot, a gold Coin, an Amulet and a Roman Helmet, and an ornate Sword as well as the fatal Volcano. There are also the traditional playing cards from ten to Ace that form the lower paying symbols in the game. 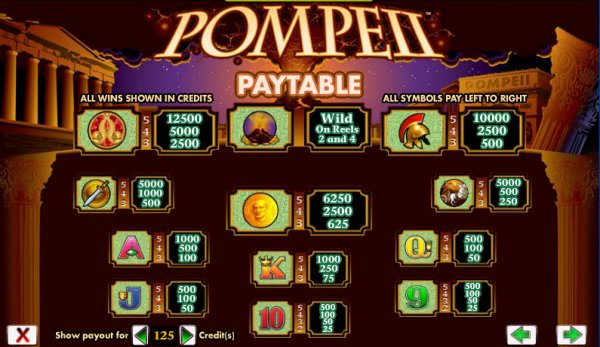 The gold Roman Coin is the Scatter, and will be the symbol that activates the free spins bonus round. The gold coins are in scribed with Julius Caesar’s famous remark, “I came, I saw, I conquered”. Each time you make a big win, the screen of the game Pompeii shakes as if Mount Vesuvius was about to erupt again.