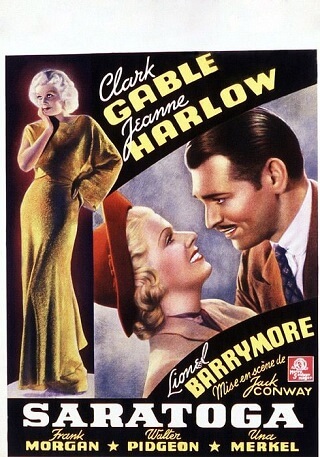 A review of Saratoga – Gable and Harlow’s Final Film Together

The romantic comedy Saratoga, produced by MGM and released in 1937, is the last of six films that Clark Gable and Jean Harlow starred in together. It was also Harlow’s final film; in fact, she died shortly before shooting was complete. MGM initially wanted to recast and reshoot the film, but Harlow’s fans protested so vociferously that the film was completed with a stand-in, shot from behind or with her costume obscuring her face.

The film made a profit at the box office and was well received by critics. Of course, it had a built-in audience among the thousands of grieving Harlow fans, who flocked to see their idol one last time. The dialogue sounds slightly corny to modern ears, but at the time the repartee between Gable and Harlow was a popular draw-card. Saratoga also includes some exciting horse racing betting scenes, to add thrills to the romantic comedy.

The Bookie and the Gold Digger

The action in Saratoga revolves around thoroughbred horses. Gable plays Duke, a bookmaker who acquires the deeds to the Clayton family stud farm in payment for a gambling debt. The Clayton daughter, Carol returns from England with a wealthy fiancé after the death of her father, and tries to buy the stud farm back from Duke. He calls her out on her plan to marry for money, and the two begin a stormy feud that can only end one way.

The rest of the story is the traditional mix of schemes, misunderstandings and fights that lead eventually to true love. There is a good deal of horse racing, which at the time was the most popular sport in the USA. Scenes were shot at actual race meetings in Louisville, Kentucky and Saratoga, New York, so the massive crowds seen on screen are authentic.

Part of the success of Saratoga is due to the partnership between Gable and Harlow; they had already established a solid chemistry in five earlier films. She excelled at playing beautiful, strong-willed but uptight women, initially convinced that he was way beneath her. Gable specialised in a trademark loucheness; he was a straight-talking self-made man who could seduce women, while infuriating them with his sly grin and barbed quips at the same time.

Together, with him being laconic and calculating, and her being no less of a schemer but with a good deal more nervous energy, they played the rom-com formula perfectly. In Saratoga, their relationship moves from mutual antagonism to flirtatious banter to deeply in love as a natural progression, as they each discover the true self that the other tries to hide under a spiky exterior.

Coping with a Star’s Death

Nine tenths of the shooting for Saratoga had been completed when Harlow collapsed on set. She succumbed to kidney failure a week later, thought to be exacerbated by sunstroke and an infection from impacted wisdom teeth. When an outcry from fans prevented recasting, actress Mary Dees was brought in suitably disguised, to play the rest of Harlow’s scenes onscreen. Harlow’s voice for these scenes was provided by Paula Winslowe.